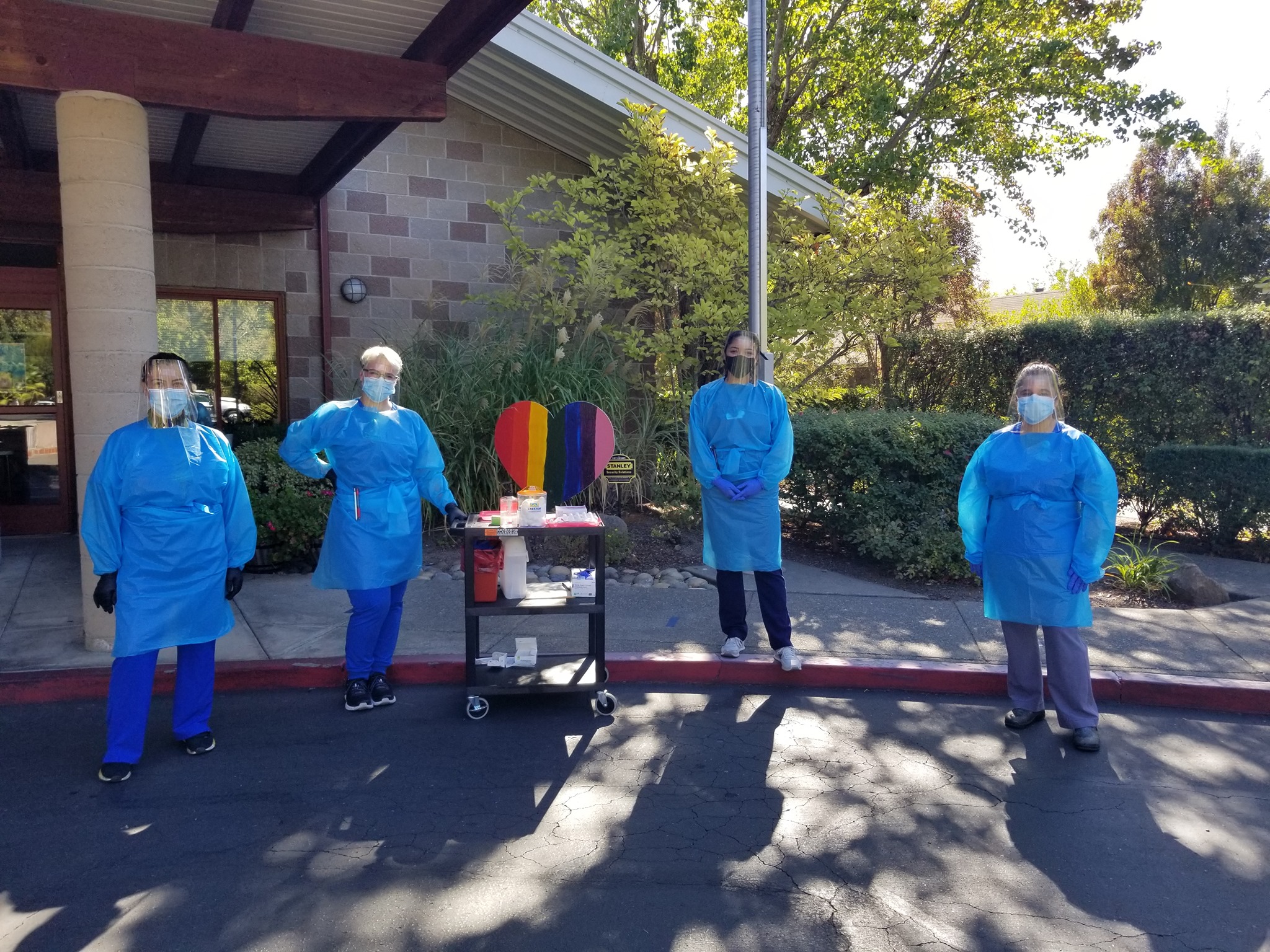 September 22, 2020 Serving Uninsured and Underinsured People in a Time of Crisis

From shifting toward Zoom and telephone appointments, to setting up virus testing clinics, Sonoma County’s health centers have handled the sudden changes brought on by the COVID pandemic like the champions they are. In addition to the large healthcare centers, smaller community clinics that serve those with limited access to medical services have faced unique challenges and have utilized creative approaches to providing care.

One such clinic is the Jewish Community Free Clinic in Santa Rosa. Located between downtown Santa Rosa and Montgomery Village, the clinic has offered free medical services to uninsured clients—provided by an all-volunteer medical staff—for nearly two decades.

Executive Director Donna Waldman has been with the clinic since it first opened in 2001. One of twelve original founders, Waldman became the center’s executive director in 2007.

Approximately 1,800 people utilize the clinic’s free services each year (2,800 visits per year). While those between 25 and 50 years old are their highest demographic, Waldman says they see people of all ages. Of the older population, most are undocumented immigrants.

Although their target population is the uninsured, Waldman says that the Affordable Care Act has created some complexity in the way they operate. For example, someone may have health insurance, but with co-pays or deductibles too high for them to afford. For low-income people who might have up to a $1,000 deductible, that’s like not having anything, she says.

“We are a completely independent organization that answers only to ourselves and our board and our executive team. We have no government money. We have no fees for service,” she says. “So, if somebody comes to us and they want to see the doctor and they say they have nowhere else to go at that moment, we absolutely see them.”

Waldman points out that the free clinics are great organizations, especially in time of crisis, because of the lack of bureaucracy. This means they have the flexibility to adapt quickly and to serve people during emergencies, like the pandemic or the fires that are becoming more frequent in Sonoma County. During the 2017 fires, for example, the clinic was able to quickly provide prescriptions for people who had trouble getting refills elsewhere.

In the first months of shelter in place when things seemed to change quite frequently, Waldman says that the clinic team made plans for two weeks at a time through mid-July. Mental health appointments and other appointments were transferred to telehealth. And during that time, Waldman says the clinic did a lot of TB testing, which she says is one of the most important things they do, as home health care employees cannot work without having annual TB tests. And instead of doing skin tests that require two appointments, they sent patients for QuantiFERON lab tests to reduce the number of visits to the clinic.

“Home healthcare during a pandemic is perhaps one of the most important things in the world. With so many people at home who need help, we have to make sure there’s plenty of people taking care of people that are at home,” says Waldman. “We cannot have an outbreak of TB in the middle of a pandemic.”

Twenty miles east in Sonoma, Cheryl Johnson is the CEO of the Sonoma Valley Community Health Center. The center first opened its doors in 1992 and served roughly 7,068 patients in 2019. Their clients tend to be low-income, relying on Medi-Cal or Medicare for services, which include dental, prenatal care, primary care, pain management services, chiropractic services, and substance use services.

When shelter in place guidelines were first announced in March, Johnson and her team decided to keep the center open to patients.

“We had a lengthy conversation with our administrative staff because the general premise in a pandemic is that you go into protective mode and you do mostly telehealth,” says Johnson. “But we figured out a way to protect our staff to be able to provide some level of normalcy.”

Johnson says that to ensure the safety for everyone, the center spent more on PPE since March than the entire eight years she’s worked for the clinic. Physical distancing guidelines are strictly followed, each staff member and patient has a temperature check and is provided a brand new mask before entering the building.

With the help of a federal grant and funding from Community Foundation Sonoma County, Sonoma Valley Health Center also offered both in-house and drive through COVID testing between late May and mid-July. The drive through program for community members—and some out of towners—tested about 3,900 people. The center conducted about 300 in-house tests, as well.

“We’re looking to resume the testing for this upcoming fall season,” says Johnson. “We’re trying to figure out how to deal with flu season because the symptoms are almost identical.”

Both Johnson and Waldman urge everyone to get a flu shot this year and both clinics have the flu vaccines available.

Overall, Johnson says that the center is also focusing on providing a lot of accessible information about COVID to patients and community members. The center collaborated with medics for literacy and information that can be found on their website. The written information is in English and in Spanish, and the narration on numerous informational videos is available in 21 different languages.

The Jewish Community Free Clinic has also been working hard to provide accessible information through bilingual pamphlets and outreach in the community. Both Johnson and Waldman say that they hope to ensure that the Latinx population specifically—a segment of the Sonoma County population that has been disproportionally impacted by the COVID pandemic—receives the information and accesses services.

In the meantime, both clinics continue to be busy. Johnson is preparing for a second round of drive through COVID testing. Waldman’s staff continues adapting, providing school and work physicals—and some eye exams—in the atrium outside the clinic. She’s hoping to have a flu shot clinic scheduled soon.

“Providing 2,800 visits is not a huge number, but it sure is important to the 1,800 people we serve. When you think about what it means to a low-income person, to be able to go to the doctor and get nursing care, and doctor care, and social services, mental health, acupuncture, vaccines, all free, and medications for them to walk away with,” says Waldman. “What it means to that person at that moment, is just so moving to me. Because when you’re sick, you’re so vulnerable.”

Waldman adds that the financial support from Community Foundation Sonoma County is used for basic needs, which makes a world of difference for her small clinic.