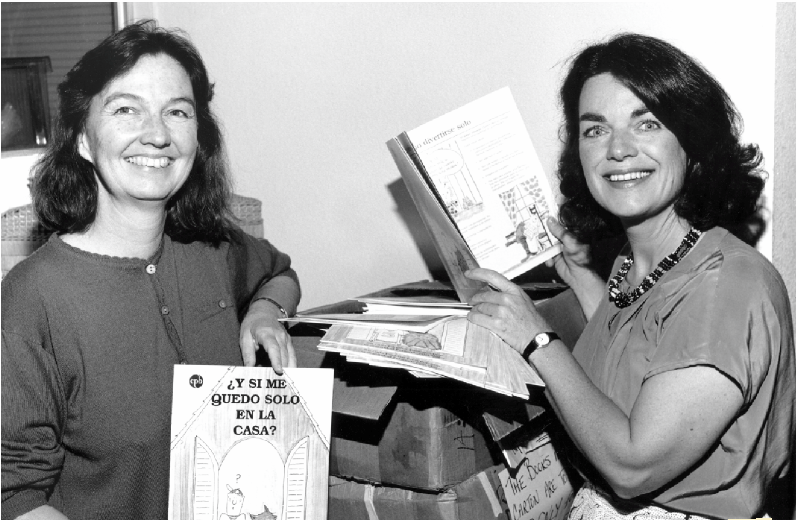 Remember what you were doing in 1986? (We keep trying to forget our betamax players and day-glo accessories.) The amazing individuals who crafted, guided and led Community Foundation Sonoma County throughout our history do; they reflected on the work and impact of the Community Foundation during their tenure as leaders.

Virginia Hubbell (VH) served as the Community Foundation’s first Executive Director from 1986 to 1991. She was responsible for teaching Sonoma County how a Community Foundation builds long-term sustainability. Virginia and her assistant were the first two employees.

Kay Marquet (KM) was President and CEO from 1991 to 2009. During her tenure, Community Foundation Sonoma County’s assets grew from $4.3 million to $137 million, and the staff expanded from four to 15 people.

Barbara Hughes (BH) oversaw assets of $153.5 million, grew staff and foundation capacity, and Oliver Ranch became a supporting organization. By the end of her time at Community Foundation in 2012, $128.5 million in grants had been made.

Elizabeth Brown (EB) is the current President and CEO and came to Community Foundation Sonoma County in 2012. Under her leadership, CFSC has focused our grantmaking work on equity, made our philanthropic services and tools more strategic and relevant to donors, and undertaken a business model assessment.

What was the largest community need during your time as a leader?

VH: When I was hired in 1986 as the first Executive Director of the then “Sonoma County Foundation,” it was a time of rampant growth and development in this area. It was also the beginning of what we know today as environmental activism. The two camps, developers and environmentalists, were widely divided, felt they had nothing in common, and spoke different languages. They were rarely if ever in the same room together, so the gap continued to widen. Enter Jeannie Schulz and her idea to try to bridge the gap by having a series of “table talks” where the two groups could meet each other personally, and learn more about what they had in common. It was a brilliant way to serve as a catalyst for communications and community building.

KM: Unfortunately, some needs seem to be ongoing. The largest community need was and is homelessness. For five years, we convened Shelter Solutions, a public/private partnership including the Community Foundation, the City of Santa Rosa, the County of Sonoma, and other stakeholders. That process led to the establishment of Sam Jones Hall and bolstered homeless services in the county.

BH: In 2009-10, in the midst of the recession, poverty, homelessness and hunger were the issues of greatest focus and need. Job losses forced many families to seek emergency or supplemental assistance for the first time. The Community Foundation made a significant, discretionary grant to the Food Bank, who then regranted it as a credit to its 140+ agencies and pantries, allowing many of them to obtain food from the Food Bank at no cost for up to one year. This allowed small agencies to direct their small, often volunteer staffs toward providing nutritious food and serving clients rather than seeking small donations to purchase food.

EB: I think most of the needs circle back to issues around poverty and equity. Portrait of Sonoma County painted a clear picture of this in the report we worked on with them several years ago—that your quality of life and even length of life is affected more by your zip code than your genetic code. We’ve built in our equity values into our grantmaking and community leadership whenever possible. By doing this, we hope we play a role in shifting the systems and cycles that lead to challenges for far too many in our community. One way we do this is through focusing on early-childhood education, knowing that investing early in a child’s life so that they are kindergarten-ready can set them up for success later in life. This is what the whole notion of “cradle to career” is all about.

What was a meaningful grant or a favorite grant given during your tenure?

VH: A major need during my tenure was for parenting education. At that time, education for parents was a new, unformed idea, even controversial! It was a need for which the many well qualified social service organizations in the County were calling out for us to support. The Foundation again acted as the catalyst, bringing together the many resources and coordinating efforts. The fledgling Foundation helped meet both the needs of parents and children, and, a wide range of nonprofit community agencies. The Parent Education Project was a first, and it became a model for others to follow.

KM: There were many meaningful grants (this is difficult to choose)! The early partnership with the National Endowment for the Arts provided the opportunity for the Community Foundation to establish a permanent arts endowment fund, plus grants to emerging artists. Small grants encouraged and enabled talented artists to continue their work and not give up their dream.

EB: My “favorite” grants tend to be the most recent ones as it is impossible to choose among all of the excellent organizations and programs we support. We just invested $250k in the Sonoma Land Trust towards the purchase of the land that will create the transformative parks project, the Southeast Greenway. This is a meaningful grant because we are playing an important role in leveraging other funds and the project itself will truly change Santa Rosa—our own Central Park!

What accomplishment are you most proud of?

VH: When I think of the many things we accomplished those first four years, I am simply amazed. We went from a handful of people who had never even heard about a “community foundation” and knowing what it did, to a place where those that followed us had a clearer sense of its purpose, and an understanding of how it could fund worthy projects and bring various facets of the community together. It was a time of everything being new, being tried for the first time, and the act of educating the community, raising awareness and funds, and starting a grantmaking program, were all firsts. What am I most proud of? I am most proud of being there as the first executive director and being the catalyst for the wonderful vessel the Sonoma Community Foundation has become. I salute all those who were there at the beginning, and all those many talented people that have followed. Together we have created a remarkable vessel for improving the community of Sonoma County.

Charles (Chop) DeMeo left the bulk of his estate, approximately $16 Million to help moms across the county avoid homelessness and to secure a place for Santa Rosa teens. Listening forums were held, a teen advisory board was formed and an advisory board helped to establish the Club. It was a long process to buy the building, do a major renovation, staff and open the Club. There were ups and downs, concerns of many types, the need for more program dollars and staff, etc. But today, I am so very pleased by the results. I believe Chop would be thrilled! Chop’s Teen Club is a vital part of our community providing a safe nurturing place for Santa Rosa teens to learn and grow.

BH: I am proud of all of the work the Community Foundation does in Sonoma County, much of it “behind the scenes.” As I look back on my time at the foundation, I am particularly proud of our early stewardship of Hazel and Roland Todd’s gift, welcoming the Oliver Ranch as a supporting organization and redefining the funding plan for Chop’s Teen Center.

The Todd’s gift called on us to engage the community at many levels: through face-to-face community interviews to determine those most pressing needs within the areas defined by the Todds, through service providers to understand how they might better serve those needs and through a community organizing process intended to develop the skills and tools within the community (mostly in the Springs area of Sonoma Valley) allowing individuals to bring about positive change in their own community.

EB: I hope my proudest achievement is yet to come because I always believe we build on our history and success but we can and will do more to grow both the amount and the impact of philanthropy in Sonoma County. That said, I’m most proud of the team I have the honor of working with every day. To a person, they are an incredibly committed, big-hearted, and achieving group. We’ve done big things together including refining our donor service model, launching Early Childhood Education and Latino Leadership Initiatives, moving our offices from downtown to Stony Point Lake, and forging a partnership with Sonoma Wine Country Weekend. Every day I learn from them and laugh with them, which makes me oh-so grateful and the luckiest boss in town.