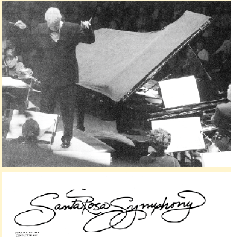 Jean Schulz persuaded Rolf Illsley, cofounder of Optical Coating Laboratory, Inc. to donate $10,000. “We recognized we needed to give grants in order to get newspaper attention,” Schulz said. “We made four $1,500 grants, one in each of our areas of interest—arts, the environment, education, and human services—and in different areas of the county, We put the rest into our endowment.”

(Louise) Levinger, a supporter of the arts, suggested a highly visible grant—a grand piano for the Santa Rosa Symphony. The Symphony had been using Santa Rosa High School’s grand piano, trucking it back and forth between the high school and performances at the Luther Burbank Center for the Arts. The frequent moves were expensive and creating wear and tear on the piano.

So in 1984, the Community Foundation, with money from the Schulz Foundation, donated $34,346 to the Santa Rosa Symphony to purchase a grand piano—a contribution duly noted in the newspapers. It was a Hamburg Steinway, a “piano with a soul,” according to Polly Fisher, then manager of the Santa Rosa Symphony. The grand piano is still in use and moved with the Symphony to the Donald and Maureen Green Music Center at Sonoma State University.