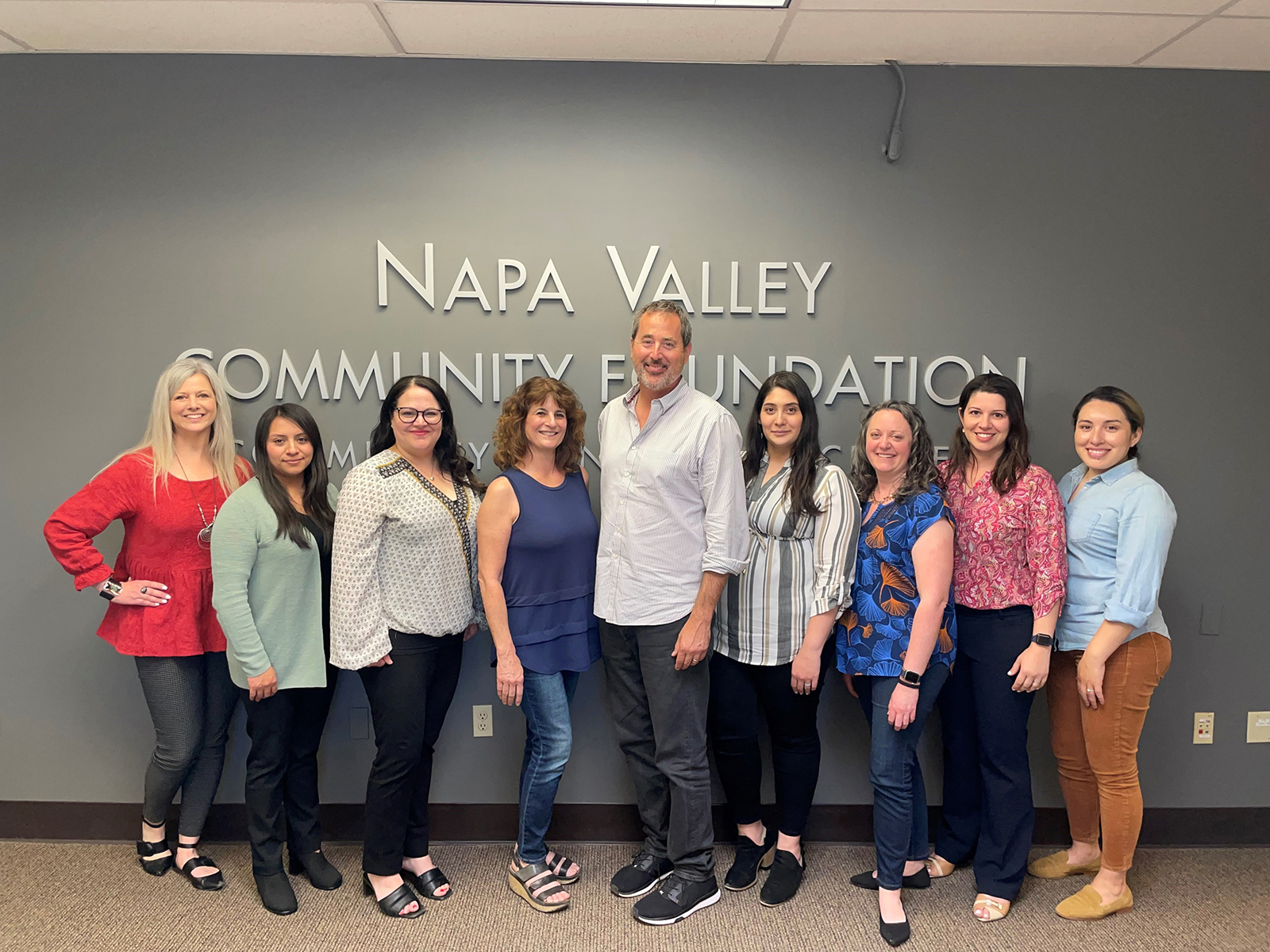 Three years before the North Bay’s October 2017 fires, Napa County was struck with a 6.0 earthquake, a disaster that led the county to quickly become more readily prepared for large scale emergencies. Numerous historic buildings suffered damage and nearly 200 people were injured in the quake. Damage costs were estimated to be around $360 million, and the Napa Valley Community Foundation (NVCF) distributed nearly $8 million to several thousand affected households.

“Coming into the fires, we already had a little bit of practice,” says NVCF’s executive director, Terence Mulligan.

The organization, which was founded in 1994, soon developed a COAD, or Community Organizations Active in Disaster, and provided a technical assistance program for around twenty important second responder nonprofits so they were prepared for future disasters. This model was then shared with Community Foundation Sonoma County. Additionally, the two organizations have worked collaboratively, strengthening the relationship with formal and informal components.

On the formal side, both foundations have co-invested in two things. One was a study to examine how Sonoma and Napa nonprofits had been affected by the 2017 fires. The other was the Napa-Sonoma ADU initiative. On the Sonoma County end, both projects were funded by CFSC’s Resilience Fund.

“And then informally, we’ve been in constant communication and continue to share learning,” says Julia DeNatale, NVCF’s Vice President of Community Impact. “We learned about long-term recovery from Sonoma, because we had less experience with it.”

DeNatale sits on the League of California Community Foundation’s Disaster Advisory Council, along with CFSC’s former VP of Community Impact, Karin Demarest. One aspect of participation on the council is funding other community foundations throughout the state. Another is sharing lived experience and wisdom with other foundations that haven’t yet gone through similar emergencies we’ve had in the North Bay.

“Disasters are really hard, and you have a different set of expectations from your community when a disaster happens,” says Mulligan, who has been with NVCF for 18 years. “So being there for one another—collegial, supportive—we were learning from one another as we went along and sharing our experience so that we could do better, so we could do right by the people that we serve on either side of the Mayacamas Range. And that was really valuable, I think, to each of us.”

Both Napa and Sonoma Counties have faced multiple challenges in the last few years, including numerous fires, flooding, and the pandemic. One of the biggest ongoing issues for both, which NVCF continues to focus on, is the local housing crisis.

“We continue to lose housing stock. We no longer have an eviction moratorium or price gouging law in place. We don’t have a local one that went into place after the state expired, so there’s just a real struggle,” says DeNatale. “The cost of housing is going up. We are losing members of our workforce and children in our schools at an alarming rate.”

DeNatale says an additional issue is the strain on the non-profit sector.

“There are a number of non-profits that are doing this work year-round now; fire and pandemic and preparedness and all of that. And I think: how can we support them?” she says. “Frankly, the pay is not fantastic at the case manager level, and we’ve got plenty of knowledgeable BIPOC staff that can’t afford to live here either.”

Napa Valley Community Foundation has grown considerably in the last eight years in terms of staffing, grant making budgets and asset size, in part due to the frequency of disasters. They have 20 regularly funded grantees that each have an emergency operations and continuity of operations plan. DeNatale says that throughout the pandemic, they have seen many community foundations begin to loosen the reporting and application requirements, focusing more on trust-based philanthropy, something NVCF has committed to, in order to remove barriers to the non-profits that are serving people.

“I think we have a fully mature operating strategy around disaster that we, through the school of hard knocks, have found our way into,” says Mulligan. “And what we know from the get-go is that there’ll be a certain segment of the population that doesn’t have any financial cushion that will need direct cash assistance because they’ve been evacuated, and they can’t go to work.”

Mulligan points out that both Sonoma and Napa Counties have large portions of the workforce employed in agriculture and hospitality, many of whom are undocumented and not eligible for government-funded disaster assistance. This segment of the North Bay community is often the hardest hit.

“That’s why we fund emergency services for everybody, no matter their income, in those first hours and days, [although] we focus our money on people who are demonstrably worse off, who don’t have insurance, who can’t collect unemployment—the old, the sick, the undocumented, the low income, the underinsured,” says Mulligan. “And in a world where there’s never enough money, we’ve just distilled our way into knowing how to do it better.”

The foundation provides about 80% of the funding for the Napa Valley COAD, and sustaining the COAD remains a high priority. NVCF has invested in things like the Fire Wise Foundation to build capacity and has helped the County of Napa purchase Zone Haven Evacuation Management Software.

“A lot of this work needs to be regional because that’s, at least with fires, how it goes,” adds DeNatale, who is also in talks with Marin County in addition to Sonoma County about a regional approach. “We’ve got a much higher frequency of disasters, frankly, and less money because there’s more frequency, so how can we do some things regionally?”

“We’re trying to be a little more prospective than simply reactive,” adds Mulligan. “We’re trying to think of what could be done with money and political influence locally before the next disaster.”