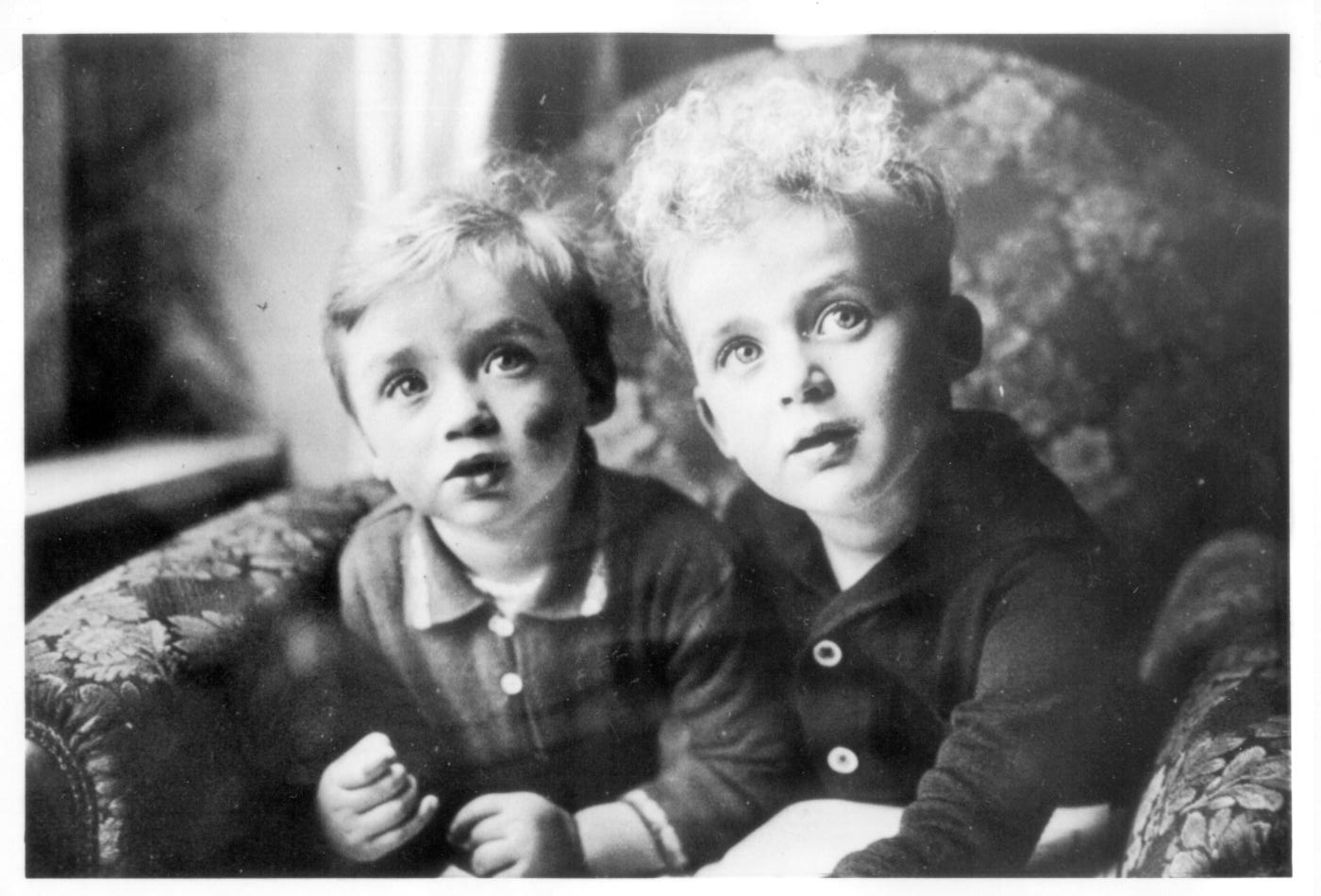 Brothers, ages 11 and 9, are put on a train alone to escape a growing threat to Jews as war looms. Their parents stay behind in Germany, hoping to join them after taking care of family affairs. They will never see each other again.

Hans (“Hank”) Cohn and younger brother Bert lived briefly in France and Portugal with other refugee children at an orphanage. Unknown to the brothers, their parents Fritz and Ilse Cohn were killed by Nazis before they could flee. Their crime: attempting to communicate with their children.

After a Trans-Atlantic boat ride with hundreds of other refugee children, the boys, then ages 13 and 11, found themselves alone in a new world with little language, no family, no resources. A newspaper story listed names of children needing homes. Whether by chance or miracle, a cousin of their German grandfather saw their names and said, “I’ll take them.” Living in Minnesota and then Iowa, the boys grew up to become educated and successful American citizens.

Older brother Hank enlisted in the U.S. Army with a strong desire to return to Germany to reunite with his parents, whose fate was then unknown. As the war was coming to an end, his hopes were dashed when he learned of their deaths. When the Korean War commenced, he was drafted and became a Psychiatric Technician. His experiences as a youth, his military service and the values of his Jewish upbringing, lead to life-long career in social work, focusing on traumatized children. After all, he knew from whence they came. His motto throughout a life dedicated to helping others was, “If I give up, they win.”

Following marriage to wife Adrienne and the birth of their two children, son Fred and daughter Renee, Hank continued to selflessly help others in Southern California. Hank attended USC School of Social Work, and then worked as clinical director for Jewish Big Brothers, counseling Holocaust survivor families and first generation kids and at-risk youth. Throughout his career, Hank distinguished himself as a leader in social work and advocated for the needs of those most vulnerable.

Only as adults did the children learn the details of their father’s daunting journey to America, and the fate of his family. Daughter Renee recounted her father’s visit to Germany where he learned more about his own parents.  “My dad, after mom died, took my brother and me to Germany. He had put all of that aside for 65 years. First he said, ‘I’m going by myself first, on my own.’ He had a cousin who had been in East Germany and communicated after the wall went down. He met her, toured the old town, and went to the cemetery where our grandparents were buried. Of course, it was very emotional. He came back and said, ‘I want you kids to see this.’ On that trip we learned the rest of his story.”

After 45 years of serving others cheerfully and selflessly, the Cohn’s followed daughter Renee north to Sonoma County for their retirement years. Caring about others as he did, Hank continued in service, volunteering with numerous local nonprofits and speaking in school classrooms about The Holocaust. His message: Please learn from my story – this must never happen again.

After many probing and thoughtful conversations with Community Foundation Sonoma County staff, he began to formulate how he might craft a very personal and unique legacy, one that while modest in scope, could have the most impact. As a volunteer for United Way, he made site visits to many nonprofits and got to know their leaders. Having been in executive roles in human services organizations all his adult life, he knew the importance of good leadership combined with hard-to-come-by discretionary funds.

Working with his financial advisor and Community Foundation staff, Hank Cohn created a legacy in honor of his parents; The Fritz and Ilse Cohn Memorial Fund. The fund named in their honor allows leaders of local and regional human services organizations to have resources aimed at building institutional capacity thereby positioning themselves for sustainability through such means as strategic planning and staff / board development.

Through the years, the fund has helped nonprofits develop strategies for applying to Upstream Investments, provide professional development opportunities related to improved budgeting techniques and grant writing, research and development of pilot programs, and strategic planning. Most recently it provided support to Cradle to Career’s Design Thinking workshop for Sonoma County Office of Education.

Another legacy can be found in his children’s life choices; both are dedicated to serving others in nonprofit and government careers. Says son Fred, “The whole family has always been public service oriented– it’s been genetic. Our mom worked as a special education aide and volunteered for all of our activities. Dad pursued a career in human services. His motivation to establish the fund and his public service career had to do with giving back. As a young child, Dad benefited greatly from service systems and decided early on to commit his life to public service. Establishing his fund was one of the last manifestations . . . using his assets to help build capacity in Sonoma County . . . he hoped he’d make a difference.”

“He was so pleased to establish a fund that honored his history. He overcame so much, yet he enjoyed a lasting marriage, was a great dad, and was committed to a career in service to his community. He felt his parents would have been proud,” said Renee.

Fred continues, “Without any real guidance we both chose public service. Our hope is that with these resources given, they will be augmented and grow over time, will be invested in Sonoma County in things that can truly make a difference. Renee and I hope that the grants provide an opportunity to be creative and make a difference, creating capacity and leverage and perhaps some real change in the community and how its residents, particularly its children, are served.”