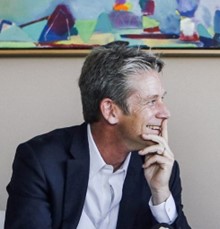 Posted at 18:44h in by Caitlin Childs

Ralph Lewin is the Executive Director of the Peter E. Haas Jr. Family Fund. The Fund focuses on equity and innovation in education, health and social services as well as supporting work to advance our democracy.

Prior to joining the Fund, Ralph served as Executive Director of the Mechanics’ Institute, which was founded in 1854 and includes the oldest lending library on the west coast of the United States. Under his leadership, the San Francisco Chronicle named Mechanics’ the “Best of the Bay” and wrote that “the institute stands as a beacon of what a cultural institution can be for all citizens.”

Ralph previously served as president and CEO of California Humanities, a statewide partner of the National Endowment for the Humanities. Among other activities, he has served on the board of directors of Heyday Books, the Federation of State Humanities Councils, and the University of California Humanities Research Institute. His public speaking engagements include the White House, the American Academy of Arts and Sciences, and the National Humanities Conference. He holds two bachelor’s degrees from UC Santa Barbara (political science and Germanic literature and languages) and a master’s in international relations from San Francisco State University. He has studied and lived in Argentina, Indonesia and Germany.