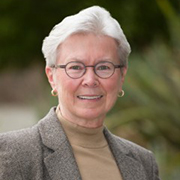 Over the years, Peg Van Camp has served on a number of nonprofit boards including Horizons Foundation, the oldest gay and lesbian community foundation in the United States; the United Way of the Bay Area; the Gold Rush Trail Foundation, and the Marin Community Foundation, where she served as a trustee for six years.  She held various roles in these volunteer positions including board chair, governance chair, and chair of other standing and ad hoc committees. She currently chairs the Audit Committee for 10,000 Degrees Marin and sits on the Advisory Board of 10,000 Degrees Sonoma. She also served as Governance Chair of the Impact100 Sonoma board of directors. Peg earned her Bachelor’s Degree in English from Lone Mountain College, San Francisco, and her Juris Doctor Degree from the University of San Francisco School of Law.   She spent more than 40 years in the financial and legal services industries as an operations and commercial lawyer for Wells Fargo Bank, and handling a wide range of practice areas including commercial, corporate and international lending, securities, and nonprofit law for Union Bank and its predecessors. She retired at the end of 2013 as senior vice president and senior counsel for Union Bank’s primary investment adviser subsidiary, for the Union Bank Foundation, and for the Bank’s Corporate Social Responsibility Division.