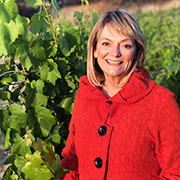 Janet Ramatici is the retired Executive Director of the Petaluma Educational Foundation (PEF), created in 1982 to improve educational opportunities for all 13,000 students in Petaluma’s public and private schools. Janet joined PEF in 2005 and worked with the Board of Directors and community supporters to spearhead a decade of dramatic growth. Before joining PEF, Janet raised her family in Petaluma while working as a freelance marketing consultant and graphic designer. Janet was a member of the St. Vincent Elementary School Board of Directors and Co-Chair of their Capital Campaign to renovate the campus in west Petaluma.

Janet’s early career in the ski industry and subsequent Hawaii hospitality industry led to a lifelong passion for travel and adventure. She is a founding member of Ski the USA and has traveled the world encouraging tourism to US ski resorts.

Janet was born and raised in St. Louis, Missouri and holds a BA degree in Sociology from the University of Colorado. She settled in Petaluma in 1987 with her husband Gary to raise their daughters, Sophia and Mary. Janet is currently a Senior Consultant with Next Step Advocates whose mission is to contribute to the betterment of our communities by providing strategies that will maximize the impact of non-profit organizations.