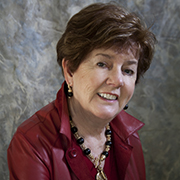 A native of South Carolina, Harriet Derwingson moved to San Francisco after college, began her career, met and married her husband, Randy, (now deceased), and attended graduate school.  In the early 1990s, Harriet’s career took her to Sacramento. At that time, she and Randy built a home in Sonoma Valley and were weekenders until she retired mid-1998.

Harriet has been active in numerous community, cultural, business, educational and civic groups in Sonoma County. She was a member of the founding board of the Sonoma Valley Museum of Art where she served two terms and was President.  She was also a founding board member of Sonoma Valley Fund, where she served two terms and was President. A member of the Women’s Health Center Advisory Board for Sonoma Valley Hospital, she was awarded a Pulse Award in 2013 by the Hospital Foundation at their annual Celebration of Women luncheon for exemplary community service. She joined the board of Sonoma Valley Fund’s parent organization, Community Foundation Sonoma County, has served as Board Chair and was recently elected to serve a third 3-year term on the board as Secretary and a member of the Executive Committee in June 2018. She was also a founding member of Impact100 Sonoma and a Master Gardener.

Harriet holds degrees from the University of South Carolina and University of San Francisco, and attended advanced executive education programs at the University of Michigan’s Graduate School of Business Administration and the Wharton School.  Her professional background is in telecommunications in areas of public affairs, government relations, strategic planning, and marketing. She retired from AT&T as Area VP – External Affairs for Northern California