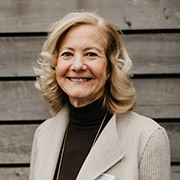 Barbara Lannin recently retired from a 27-year career in financial services where she held a series of positions of increasing responsibility including CFO of Private Client Services, Group Head of Discount Brokerage, and, most recently, Manager of Online and Mobile Banking Fraud Prevention and Authentication. Prior to entering financial services, Ms. Lannin began her career working in Europe for several years, notably for Hewlett Packard in Germany and Synthelabo in France.

Ms. Lannin holds a B.A. degree from Stanford University, a D.E.S.S from the University of Paris – Sorbonne, and an M.B.A. from the UC Berkeley.

Ms. Lannin is passionate about leadership and community. She was co-chair of San Francisco Financial Women’s Team Member Network where she had the opportunity to work with women leaders across the Bay Area. She has served on a number of non-profit boards including the Women’s Philharmonic in San Francisco and Family Bridges in Oakland. Ms. Lannin has been involved with the American Association of University Women’s S.T.E.M scholarship programs for young girls interested in science, technology, engineering, and math, and she is also a volunteer for Stanford University. At the end of 2016, shortly after she moved to Healdsburg full-time, Ms. Lannin joined the board of Healdsburg Forever where she also sits on the Grants Committee.

Complementing her passion for community is a love of travel and exploration of other countries and cultures.  Now in retirement, Ms. Lannin has been actively pursuing both foreign and domestic travel which often involves activities such as hiking, biking or sailing in addition to enjoying the food, wine and cultural sites of other regions. When not traveling, she enjoys hosting friends and family and exploring together the many beautiful areas of Sonoma County.